India and the ‘Quad’: Forging an Innovative Approach

India and the ‘Quad’: Forging an Innovative Approach

India needs to be innovative in dealing with challenges and leveraging opportunities that arrangements like the Quad present.

Read more on The Diplomat 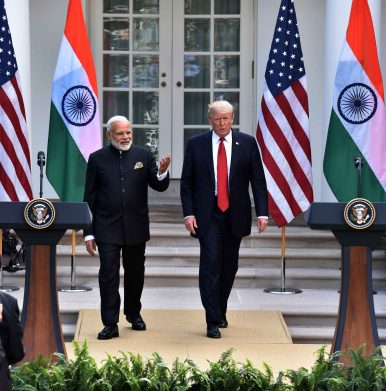 The recent meeting of the so-called Quad countries on the sidelines of 13th East Asian Summit in Singapore, along with the Trump administration’s emphasis on the free and open Indo-Pacific (FOIP) strategy, has turned the spotlight once again on the future viability of this grouping. As a strategic concept, the Quad seems to be gradually evolving with its third round of meeting this month. The participants stressed ASEAN’s centrality and committed themselves to partnering with multiple countries and forums to promote rule-based, open, free and inclusive Indo-Pacific. The U.S. national security advisor, John Bolton, rightly suggested that “this is a strategy that is still being shaped and the level of diplomatic activity has picked up.”

Members of this quadrilateral arrangement – the United States, India, Australia, and Japan – are a group of democratic countries advocating a free and open Indo-Pacific for shared peace and prosperity. The idea of the Quad could be originally attributed to Japanese Prime Minister Shinzo Abe who first mentioned it in his book Utsukushii Kuni-e (A beautiful country). It got operationalized in 2007, but failed to gain any traction as then-Australian Prime Minister Kevin Rudd backed out on the grounds of antagonizing China even as India too remained reticent. The idea was revived in 2017 with former U.S. Secretary of State Rex Tillerson pitching for “greater engagement and cooperation” among democratic powers. Japanese Foreign Minister Taro Kono proposed a revival while India and Australia expressed willingness for discussing the same. Since then, three joint secretary-level meetings involving the Quad countries have taken place.

The shift in the epicenter of global politics from the trans-Atlantic to the Indo-Pacific marked by America’s relative decline and the rise of China has significant geopolitical implications for the region. Although the ongoing uncertainty is bound to have global repercussion, Asian states will be at the forefront of this strategic flux. This is intertwined with their security and sovereignty. Asian states benefited from the U.S.-led post-Cold War order and now America’s withdrawal from that order as a result of an increasing inward focus is causing anxiety in these states regarding the future of the liberal order and the U.S. capability and willingness to defend it.

Meanwhile, China’s hegemonic designs are a growing cause of concern for countries like India, Japan, Vietnam, the Philippines, and other Asian states. Beijing is using its enhanced military capabilities to pressure neighboring countries by asserting its territorial claims. Its transgressions in Doklam and India’s Arunachal Pradesh, constantly pressuring Japan over Senkaku islands (referred by China as Diaoyu islands), threatening Vietnam over drilling oil in the areas of South China Sea, and blatantly ignoring the 2016 verdict favoring the Philippines on the South China Sea exemplify this drive towards a unilateral assertion of interests. China’s rhetoric about its peaceful rise isn’t convincing anyone anymore. The economic good emanating from China’s rise has quickly turned into a security threat. China’s aggressive behavior over the last decade led to the revival of the Quad 2.0 on the sidelines of the ASEAN summit in Manila in 2017. All the four countries in their separate briefings emphasized, among other things, the free and open Indo-Pacific, a rules-based order, freedom of navigation and respect for international law, and maritime security, all code words for managing China.

The United States’ renaming of the Hawaii-based U.S. Pacific Command (USPACOM) as U.S. Indo-Pacific Command (USIPACOM) followed by Trump administration’s repeated use of the phrase “Indo-Pacific” in tandem with the geopolitical realities has brought India to the center-stage of this geopolitical churn. This has led India to engage proactively with the United States and other major global powers like Japan and Australia in envisioning the Indo-Pacific order.

Notwithstanding the euphoria, New Delhi has exercised strategic caution while welcoming the Quad overtures. The China-dominated narrative of the Quad seems to have prompted this caution as India is the only country in the group sharing a land boundary with China. The Sino-Indian relationship hit rock bottom during Doklam crisis last year. However, diplomatic dexterity on both the sides helped diffuse tension, culminating into the Wuhan reset. Given India’s challenges on the domestic front, prolonged hostility with China would be the last thing it would want. The carefulness pertaining to the Quad seems to be stemming from this. India’s perception of the Indo-Pacific too is different from other Quad countries. For instance, India views Pakistan as a troubled littoral of the Indo-Pacific just like the United States views North Korea. There is still a need for a wider consultation mechanism to reach a broader consensus among the participating countries on important issues (like terrorism).

Indian Prime Minister Narendra Modi’s speech at Shangri-La Dialogue earlier this year described the Indo-Pacific as a “natural region” extending from the “shores of Africa to that of America,” even as he challenged the idea of the “Indo-Pacific” as any sort of strategy or an exclusive club. Nevertheless, he emphasized a “free, open and transparent Indo-Pacific grounded in respect for international maritime laws.” The speech also tried to assuage the concerns of Southeast Asian nations by placing ASEAN as central to India’s vision of Indo-Pacific.

The construct of the Indo-Pacific extending from shores of Africa to America followed by the emphasis on ASEAN centrality points to the competing views on its “geography.” While the former presents (and rightly so) the Indo-Pacific as a coherent continuum, the emphasis on ASEAN’s centrality restricts the strategic focus to the east of Indian subcontinent. Indian strategic concerns need to be viewed holistically and not be compartmentalized into eastern and western reaches. Asserting ASEAN’s centrality is also a rejection of Chinese centrality and is aimed at injecting a new life into a concept which for many has become too obsessed with China.

Read more on The Diplomat