For Kashmiriyat To Have Any Meaning, The Yatra Must Go On

You are here: Home / Blog / Article / Topic / Peace / For Kashmiriyat To Have Any Meaning, The Yatra Must Go On 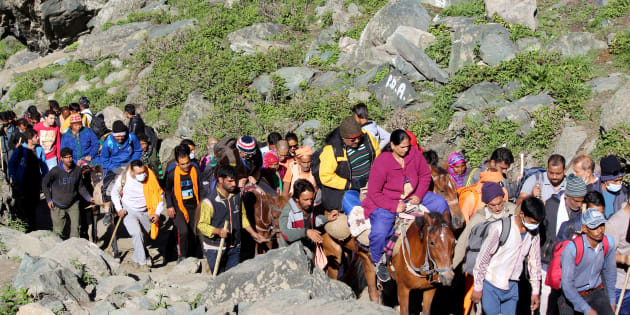 Bhagya Mani, a poor Maharashtrian woman, was admitted to the hospital with multiple fractures. “We were on the bus when firing was on from all the sides,” she said from her bed at the Anantnag district hospital. She was luckier than some of her co-travelers.

On 10 July around 8.30 pm, Pakistan-based Lashkar-e-Taiba gunmen attacked a police party and later a bus carrying 56 Hindu pilgrims to Amarnath in Kashmir. Seven were killed, and over 20 injured. This attack has left the entire nation in a state of shock, with people across the spectrum condemning the attacks.

The timing of the attack does not seem to be random. Two possible explanations suggest this.

First, the pilgrims were targeted on the 1st Monday of the month of Shravan—one of the holiest days for Hindu pilgrims. It’s when they visit the holy shrine of Amarnath, dedicated to Lord Shiva.

Cultural minorities have to feel safe for syncretism to have meaning. The Valley has to get back to its shared culture before it becomes impossible to do so.

Second, the attack appeared to have been timed to overlap the first death anniversary of militant leader Burhan Wani. His death had caused widespread anger amongst separatists in the Valley. The Monday attack could be seen as retribution for his death.

There was a surge in the number of pilgrims to Amarnath from 98,000 in 1999 to a record number of 6.4 lakh in 2011. But now this number has drastically reduced to 2.15 lakh registrations for 2017. This is primarily due to unrest and conflict in the Valley. Post Burhan’s encounter, J&K has witnessed a 45% increase in terrorism-related deaths and a 164% rise in civilian deaths, according to the South Asian Terrorism Portal.

National Capital Region: A Hub Of Opportunities That Needs A Development Sh...
Scroll to top